Canyons of the Ancients Colorado 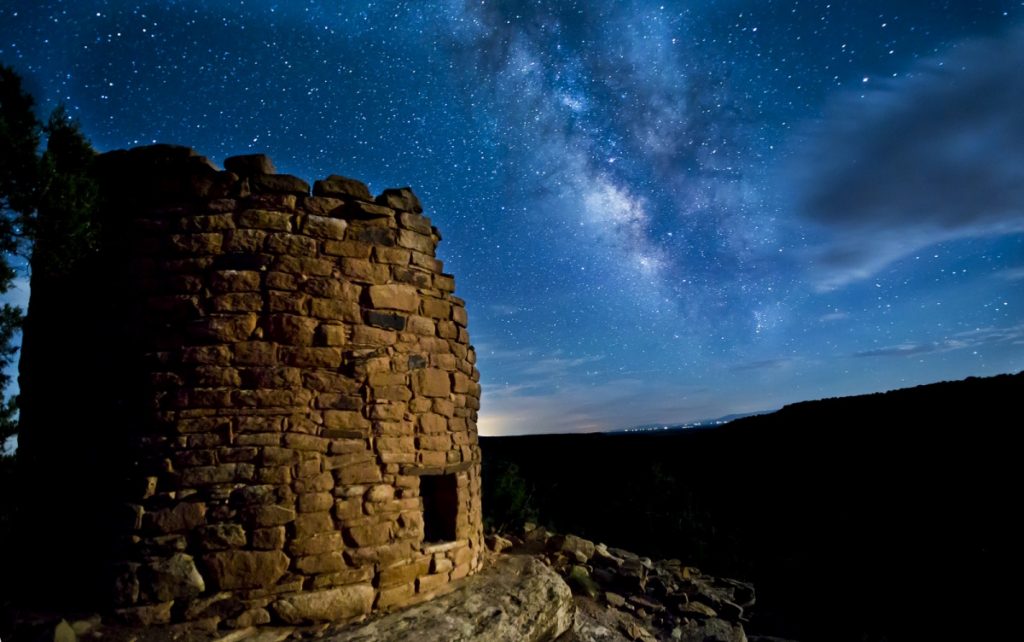 Hovenweep, located in the Monument is a designated Dark Sky site by dark sky.org

Located in southwest Colorado and southeast Utah is Canyons of the Ancients National Monument. Interestingly, it has the highest density of archeological sites of indigenous peoples found in the United States. Remarkably, you can discover and explore many intact remains of a culture that inhabited this area for 10 thousand years.

This civilization settled, developed, and lived in this region for thousands of years. In fact, the name Anasazi comes from a Navajo Indian word meaning “the ancient ones”. Furthermore, archaeologists use this name to denote the cultures of the prehistoric Basket Makers and the Pueblo Indians of North America. 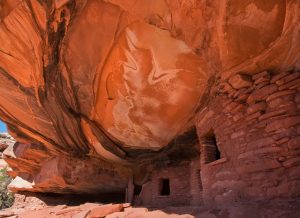 As we know, The Anasazi are also known as Cliff Dwellers because of the spectacular housing structures they built along cliffs and under overhangs in canyons. Moreover, these unique dwellings are located in the four-corners area of the United States. The four-corners encompasses large parts of Colorado, Utah, Arizona, and New Mexico. That said, The Canyons of the Ancients Monument in Colorado alone covers approximately 183,000 acres of land. To clarify, approximately 164,000 of these acres are owned by the federal government and managed by the Bureau of Land Management (BLM). Thus, visitors are expected to follow specific regulations and rules when visiting the area. Finally, please follow these guidelines to protect the fragile and important historical sites. 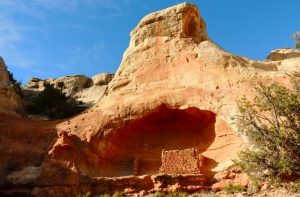 The Landscape in Canyons of the Ancients

Indeed, this part of Colorado, features a rugged landscape, desert climate, and elevations ranging from 4,900 feet to about 7,500 feet above sea level. In combination, these natural elements help to protect the cultural history of the area and its historic artifacts. Thereupon, The Canyons of the Ancients National Monument offers a “one of a kind” opportunity to see, study, and explore how cultures lived and adapted over time in the American Southwest.

Also, its recommended that you make time to visit the Canyons of the Ancients Visitor Center and Museum.

We know that early Anasazi houses consisted of underground pits lined with stone walls. Yet, in time, these pit houses developed into kivas. Furthermore, It is believed that these round, below ground structures, were used for religious ceremonies as they are by Puebloan People today. At the same time, the Anasazi began to live above ground in simple, one-story houses made from mud and wood or bricks of carved stone. 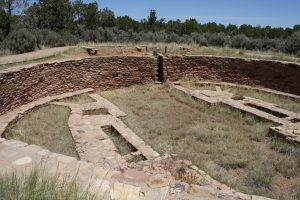 Anasazi Kiva in Canyons of the Ancients Colorado

As a matter of fact, studies by archeologists indicate that by about the mid-800s, the Anasazi began constructing multi-storied structures. In fact, these resemble modern apartment buildings. What is more, It’s important to note that the Anasazi had no metal tools. Indeed, building these large complexes rising to as many as 4 stories was an astonishing feat. Add in, carving stone bricks by hand to create the thick walls of these structures in an almost unimaginable task.

As well, the interior walls were covered in plaster for a smooth finish. With this in mind, imagine a culture without tools and written language completing the design and execution of these sophisticated, monumental, buildings. To say nothing of the construction being completed through verbal and visual instruction with amazing precision and completely by hand.

Furthermore, the Anasazi built some of these complexes into the sides of cliffs creating even more challenge. However, these new locations did make it difficult for their enemies to attack. Also, they helped protect them from the natural elements. 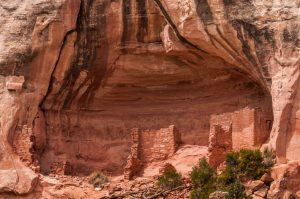 From Hunter-Gatherers to Farmers

The early Anasazi people survived by hunting and gathering wild plants. However, by about 700, they had learned to farm corn, beans, squash, and other crops. At the same time, as their farming methods improved, their food supply grew. With that, their population grew, and they began to build large, permanent settlements. 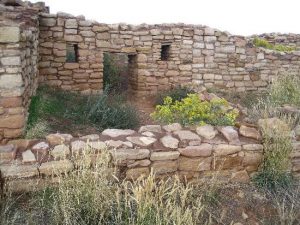 Outside an Anasazi Pueblo Canyon of the Ancients Colorado

Indeed, no one knows why, but the Anasazi had mostly abandoned these multi-storied, complexes by about 1300. Ultimately, speculation was that a drought drove them from their communities. Whatever the reason, they broke into smaller groups as they left, and moved south and east, where they built new villages.

The descendants of the Anasazi are Pueblo Indians. The name Pueblo comes from the communal dwellings they built and lived in together. As the Anasazi people dispersed, they established smaller villages, mostly in Arizona and the Rio Grande Valley of New Mexico. This is where the Pueblo people live today. Furthermore, at the end of the 20th century, about 60,000 Pueblo Indians were living in the United States.

Although it is unknown, archaeologists theorize an initial phase of Anasazi culture. This phase was originally known as Basket Maker I. However, it is now called Archaic. Furthermore, it is defined as a pre-agricultural, non-ceramic stage. It’s important to note that these Basket Makers were nomadic hunter-gatherers.

While Basket Maker I remains a theory, Basket Maker II (100 b.c.–a.d. 400) is fairly well known. The Basket Makers were given their name because of large quantities of skillfully woven baskets discovered in sites associated with their culture. Many of the baskets have been well preserved by the extremely dry conditions in the shallow caves where the Basket Makers stored their belongings. Among them, many other perishable items also withstood the ravages of time. Additional findings include bags, sandals, and nets of yucca fiber.

The semi-nomadic Basket Makers of this period had no bows and arrows. While hunting deer and small game in the area they relied on light spears and darts, propelled by spear-throwers. They also caught animals with a variety of clever nets and snares.

By this time, The Basket Makers had begun to grow squash and a type of maize. As well, they lived in simple shelters built of perishable materials or in shallow caves or rock shelters. Some of them made more substantial houses of logs and mud over saucer-shaped depressions. From time to time, to supplement their small harvests of crops, they roamed the countryside hunting and gathering additional food sources. To protect important items and their reserve supplies of food during these expeditions, they stored them in pits or depressions dug into the dry floors of caves.

During Basket Maker III ( a.d. 400–700) the Basket Makers expanded and developed new and important cultural features and technologies. Some of these included pit houses, which were built over shallow excavations, and pottery. Also, with the cultivation of beans and new varieties of maize, agriculture became more important to their livelihood. With more reliance on farming, the Basket Makers began a sedentary style of living in villages. Near the end of the period, the spear was replaced by the bow and arrow. 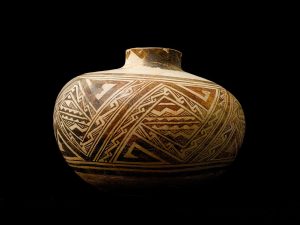 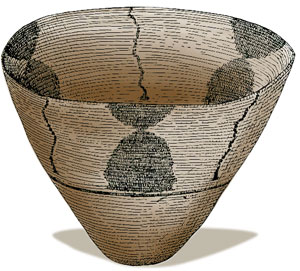 Canyons of the Ancients Black and White Anasazi Bowl or Basket

Puebloan culture developed from the Basket Makers. Puebloan life evolved through additional inventions and innovations. At the same time, there is evidence that they were enriched and influenced by trade with other cultures as far south as Central America. The Pueblo I and II periods (700–1100) represented a time of expansion and transition leading to the peak of the Anasazi Culture. Further, important developments included cotton cloth, construction of above-ground houses made from stone and adobe masonry, and finally, refinement of pottery. 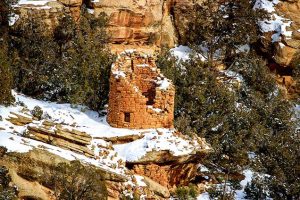 Be sure to plan at least one full day to explore the monument, if not a full weekend. I highly recommend that you add Hovenweep which will require additional time. You will need about two hours to get through the Canyons of the Ancients Visitor Center first. Many of the archaeological sites are hard to find without a map, so you need to stop by the center before you head out so you know where to go and what to look for. (A link to a map is found below). If you’re short on time, visit the heritage center and the Lowry Pueblo located next to it. You should be able to do this in half a day. If you add Mesa Verde, 2-4 days would allow you to see and experience many of these spectacular sites.

QUICK FACTS FOR THE VISITOR CENTER

Note: Due to Covid Guidelines the Visitors’ Center is currently closed.

In conclusion, make sure you take lots of water. Dehydration in this climate is common and often unexpected. As well, have some snacks and food with you as they aren’t available in these remote areas. Yet another consideration, wear clothing that covers and protects you from the intense sun at these high elevations. Finally, have sunscreen, sunglasses, a hat, insect repellant, and sturdy, comfortable walking shoes on hand. You will find that being prepared will ensure a pleasant visit.