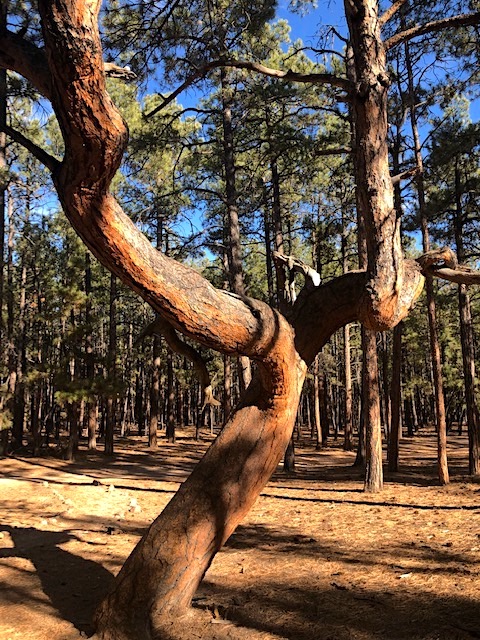 Ute Prayer Trees can be found in numerous locations In the Pikes Peak region and elsewhere in the Mountains of Colorado. Examples of these trees include the following:

The Prayer Trees listed above are examples of uses of “Trail Marker Trees”. To be sure, each of the PrayerTree types had an important purpose for those who modified them and for those who relied on them. Finally, these trees were fashioned according to their purpose. You will find that the names are fairly descriptive of these purposes.

The purposes of “Ute Prayer Trees” and other “Trail Trees” included: marking a trail or path, showing the best locations for crossing a river, and finally, culturally, they marked locations of spiritual importance such as places like burial grounds. Finally they sometimes marked locations of important, medicinal plants.

Controversy about these trees

Some people are skeptical about the claim that these trees were modified by indigenous people. To be sure, there are anomalies found in nature. However, you must be able to reason that the natives would also use nature as sign posts.

For example, If you have been in The Black Forest, northeast of Colorado Springs, it is dense with trees (thus the name). Additionally, these huge Ponderosa Pines are mostly straight and tall and it is easy to become disoriented. It makes sense that the tribes who lived in the area would somehow mark trails and other important locations. We do this today with steel and lights and signage. Equally, why wouldn’t earlier generations of people do the same thing by using what was available to them?

How were these trees modified?

The definition of a Ute Prayer Tree is: “a culturally modified tree.” Understandably, this means that the Ute Indians would intentionally modify or change a tree in a particular way for a specific purpose. First, they would peel back or make a cut the trees bark while it was a sapling. Second, they would often bend the tree in a particular way. Finally, they would tie it to reinforce these unnatural growth patterns. To accomplish this, the Utes may have used hemp ropes created from yucca plants. Additionally, they could use woven horse hair. Whatever means they used to secure the tree, it would grow according to its new limitations.

Types of trees used by the Ute in Colorado

The most common tree used by the Ute for prayer trees was the Ponderosa Pine. This tree’s thick bark makes it very resistant to wild fires. In addition, ponderosa pines grow best in full sun making it more obvious to those traversing a trail. Consequently being in the open allows the tree to grow to 150′ or more in the wild. Another tree the Utes used was the Aspen. Incidentally, the Aspen is a fast-growing tree, abundant in Colorado and probably somewhat easily manipulated when it is young.

The early, indigenous people in America modified trees for navigational, medicinal, burial, educational and spiritual purposes. As well, it was a cultural tradition. Many of the trees in Colorado are credited to the Ute Tribe. However, there are numerous “trail trees.” around the United States. For instance, many modified trees are found along The Trail of Tears. Moreover, The Trail of Tears refers to the forced relocation of approximately 60,000 Native Americans by the US Government between 1830 and 1850. Notably, The Trail of Tears is over 5,043 miles long and covers nine states.

Colorado author, John Wesley Anderson has conducted numerous interviews with members and elders of the Southern Ute Tribe on their Reservation in Southwest Colorado. His goal was to gather information about theses special trees. Mr. Anderson’s book: Ute Indian Prayer Trees of the Pikes Peak Region is based upon what he learned in these interviews combined with other research he had done. One statement he makes in his book is that “All trees modified by the Ute were sacred and prayers to recognize the tree’s consent and permission in the modification were made along with gratitude to the Creator.” In summary, Ute Prayer Trees were cultivated over the course of hundreds of years for spiritual reasons, as a form of prayer, as well as their use as markers.

Ute tribal elders say “At the beginning of time the Creator placed the Ute in “The Shining Mountains”. The Ute name for Pike’s Peak was Tava, meaning Sun Mountain. As Anderson says about his book, “It is a story about the Ute, the people of Sun Mountain and their sacred prayer trees”.

As a young girl growing up in Colorado surrounded by forests I loved encountering some of these interesting trees. Sometimes you would see them while wandering on backwoods paths and trails in the mountains or going over passes. Other times while hunting for mushrooms in the Black Forest their presence was obvious

To begin with, as a child, I really didn’t know why these trees looked so different from other trees. Also, I wouldn’t have known that someone intentionally designed them this way for a specific purpose. Furthermore I had no idea that the trails we used looking for chokecherries or pin-cherries had been made so long ago by others. In fact, it’s possible that they used the trails for the same purpose we did. All in all, these trees caught my attention. As a result, they aroused a curiosity and sparked questions about how and why? Only to discover later an important who.