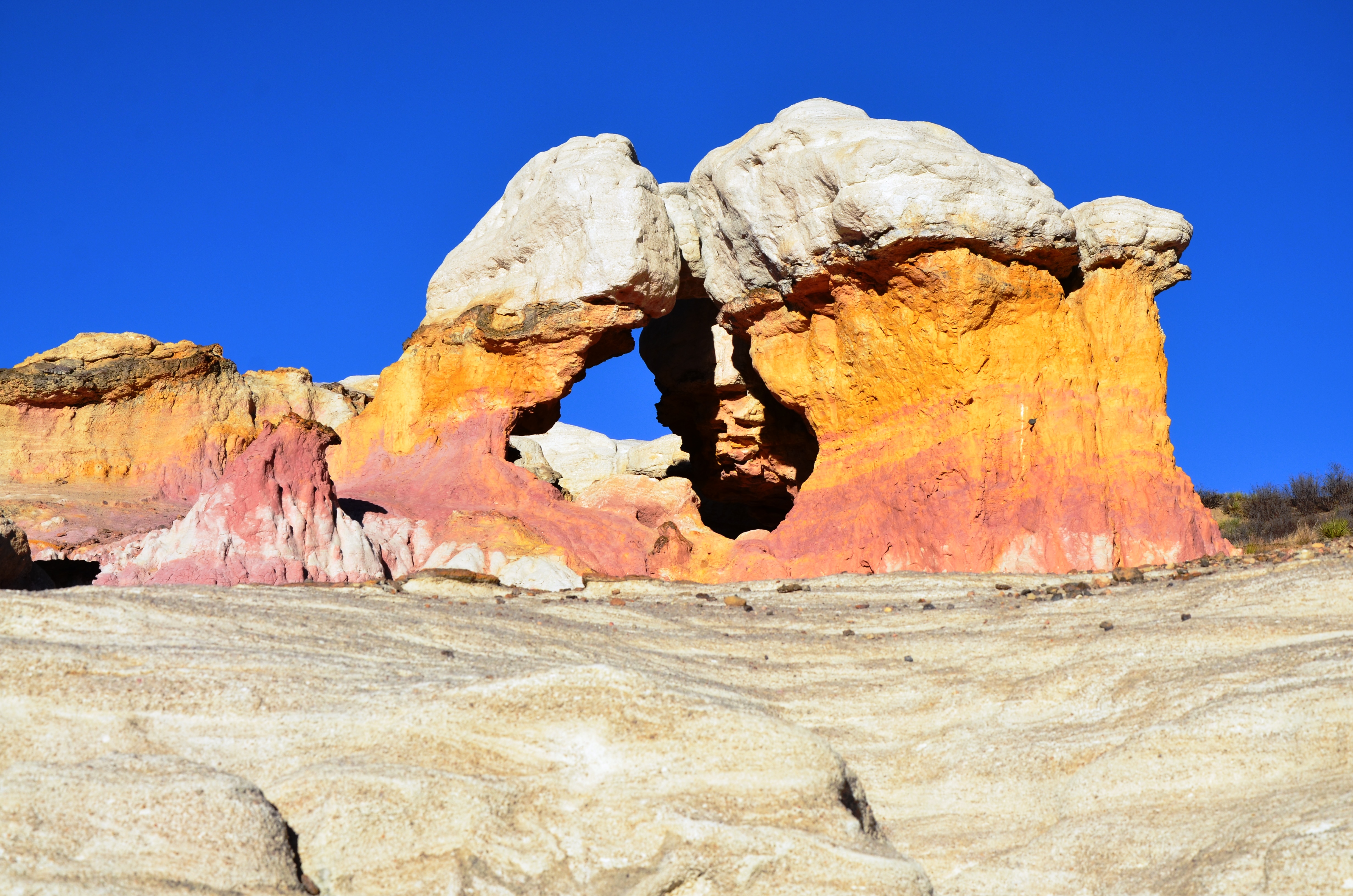 The Paint Mines are a unique open space and Interpretive Park

The park is named for the colorful clays that make up its geologic formations. The colored ecological features of the Indian Paint Mines are unique. For example, you will see bright, warm bands of color running throughout its sandstone columns. In fact, indigenous people came here to gather the various colored clays to make paint and produce ceramics. For this reason, the bright hues of red, orange, yellow, purple, white, and gray clays brought them here.

Composition of the geologic outcroppings in The Paint Mines

Oxidized iron minerals running throughout the layers of clay in these formations caused the bright colors you see. Also, a hard “capstone” remains on top as the softer sandstone underneath erodes. The erosion below the capstones makes the sandstone columns of clay beneath them narrower. As a result, these columns are left with a mushroom shape. Uniquely, these, fantasy-like, spires with caps are called hoodoos. Hoodoos are a fairly uncommon formation. By contrast, white quartzite crystals formed the whipped cream-like, tufts of the “capstones”.  Because of this, a fascinating environment dazzling with reflecting sunlight is created.

Timeline for the hoodoos

In the Tertiary Age 55 million years ago, during The Dawson Formation, hoodoo outcroppings naturally developed into what we see today. In fact, at that time, this region of Colorado was wetter, warmer, and tropical. As a result, you will often find leaf remnants and fossils of the living matter in the Paint Mines. Furthermore, The Dawson Formation contains the petrified tropical hardwoods used as materials for stone tools made by prehistoric people.

Ultimately, archaeological studies show that humans have inhabited the Paint Mines for almost 9,000 years. In fact, the plants, animals, and colorful clays attracted prehistoric people to return to the area, year after year, for thousands of years. Thus, the Paint Mines are significant in the prehistory of the area. For this reason, the park is listed as an Archaeological District in the National Register of Historic Places.

Also, we know that the earliest people to live in the Paint Mines area are commonly known as Paleo-Indians. As a matter of fact, these people were probably the descendants of the first indigenous people who migrated over the Bering Land Bridge from north-eastern Asia. We know, Paleo-Indian people hunted large game species such as mammoth, caribou, deer, and large bison found in this area at that time.

Ecology of The Paint Mines

The ecology of the Paint Mines represents the connection between the natural elements of the park. For example, there are natural drainages filled with wetlands and riparian habitats created by these geologic, formations.

Open plains surround the Paint Mines area. These plains support a mixture of native grasses such as blue grama and buffalo grasses. In addition, some stream beds and washes retain enough water to support vegetation in this dry climate. As a result, mountain mahogany, low sagebrush, chokecherry bushes, wild roses, and a variety of grasses, sedges, and reedy plants can be found here. Occasionally, you will also find a few junipers and pines.

Differences between early ecology and today

As we know, this part of Colorado supported large plant-eating animals including bison before the Euro-American settlers arrived. Today, pronghorn antelope, mule deer, and coyote are common. As far as small mammals, it is home to raccoons, skunks, rabbits, and burrowing rodents. What is more, a variety of birds including owls, Swainson’s hawks, ducks, Canada geese, mourning doves, magpies, and western meadowlarks are supported by this diverse habitat. As well, species of frogs and reptiles, including the short-horned lizard live here.

There are several basic rules for visitors to follow

This environment is very fragile. Therefore, it takes many years for nature to restore the vegetation and formations once they have been damaged by humans. The following rules have been established for the safety, enjoyment, and protection of this unique park.

Post and Photos of the Paint Mines by Danette Ulrich